THE CULTURAL IDENTITY OF SYRIAN-AMERICAN MUSLIM WOMAN IN AMERICA AS REFLECTED IN KAHF’S THE GIRL IN THE TANGERINE SCARF: A CULTURAL STUDIES ANALYSIS

<p>The issue of cultural identity in immigrants living in the United States of America which is reflected in Kahf’s “The Girl in the Tangerine Scarf” is a valuable topic to discuss. The way how Khadra, as the main character, negotiates her identity as a Syrian-American will be analyzed by a multidisciplinary approach based on the process of developing the cultural identity in cultural studies through qualitative and content analysis.  The negotiation of identity of Syrian-American has created a sense of double-consciousness in the life of this community. They experience to stand both as a Syrian and as an American. They also feel the dispersion from their original place which makes them to have memories and vision about their homeland. Moreover, the prejudices which come both from their side and the majority of American side have created a sense of not belonging to America. Moreover, through the process of acculturation, the process of negotiating identity is also shaped. This acculturation relies on 1) the loyalty to certain religion, beliefs and practices; 2) Assimilation of culture; 3) Rejection, prejudice, power and relationship between the majority and minority; 4) Gender and social class.  Moreover, the process of negotiating identity engages the historical and cultural values in both the old country and the new country. From what she has learned through her life experiences in America, her process of assimilation and her memories about Syria, she comes to a decision to see that her identity as a Syrian is as important as her identity as an American. It is also as central as her identity both as a woman and as a Muslim. In conclusion, these multiple identities that she holds are perfect combination that fit her cultural identity as a Syrian-American Muslim woman. It makes her to exhibit attitudes and behaviors of openness, inclusiveness, and tolerance, such as less prejudice and to be more cooperation toward the other.</p> 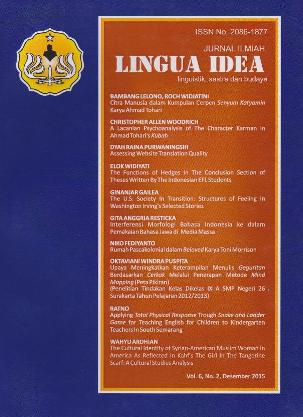 (1) Authors retain copyright and grant the journal right of first publication with the work simultaneously licensed under a Creative Commons Attribution License that allows others to share the work with an acknowledgment of the work's authorship and initial publication in this journal.